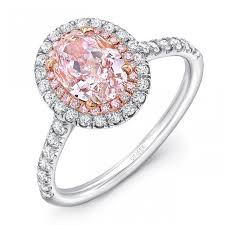 Pink diamond is a type of diamond which has all the same elements as more commonly known diamonds except that they also exhibit pink color. The source of their pink color is greatly debated in the gemological world but it is most commonly attributed to enormous additional pressure that these diamonds undergo during their formation. [2]Pink diamonds belong to a subcategory of diamonds called fancy color diamonds, the generic name for all diamonds that exhibit any sort of color. [2] Pink diamonds range from Flawless to Included, just like white diamonds. Several pink diamonds with internally flawless clarity have been discovered, but only one is known to be completely flawless, the Pink Star(which was shortly renamed the Pink Dream until it diverted to Sotheby’s). 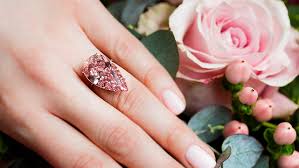 Estate Jewelry (or jewellery) is a term used, most commonly in a retail sense, to refer to jewelry and often timepieces which are part of the ‘estate’ of a deceased person. More correctly estate jewelry is second-hand or pre-owned jewelry, with the ‘estate’ appellation signifying that the item is antique, vintage or an otherwise considered a significant or important piece. 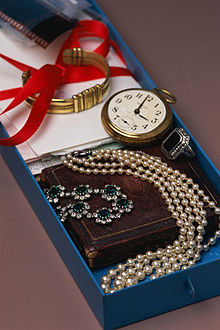 Georgian-era jewelry is fairly hard to come by as much of it has been dismantled over the years. Therefore, it represents some of the most sought-after estate jewelry.

Early Victorian-era jewelry also featured nature-inspired designs, similar to jewelry of the Georgian era. Frequently, these designs were delicately and intricately etched into gold. Lockets and brooches were popular in daytime jewelry during the early Victorian era, whereas colored gemstones and diamonds were worn during the evening.

During the Late Victorian or Aesthetic period, jewelers used diamonds and feminine, bright gemstones such as sapphire, peridot, and spinel. Star and crescent designs as well as elaborate hat pins were also popular. Some scholars believe the aesthetic era began sooner, in 1875, and ended as early as 1890.

Due to the Industrial Revolution, many jewelry designers rebelled during the Arts and Crafts movement, returning to intricate jewelry designs and handmade craftsmanship. It was common for jewelry of this era to be simple in pattern and made of colorful, uncut stones.

Art Nouveau jewelry features natural designs such as flowers and butterflies and were generally considered "romantic". This style was popular from about 1895 until World War I. The style actually began around 1875 in Paris, and its influence went throughout the western world. The style died out by the end of World War I but has often been revived. Art Nouveau jewelry follows curves and naturalistic designs, especially depicting long-haired, sensual women, sometimes turning into bird-like or flower-like forms.
Art Nouveau vintage jewelry is still a source of inspiration and popular among many collectors; in particular collectors of the work of Rene Jules Lalique and Louis Comfort Tiffany.

The Edwardian period began with the death of Queen Victoria, when her son Edward became King. During this period, many of the Edwardian-designed pieces incorporated more expensive gems such as diamonds, emeralds, and rubies in elaborate designs.

A stylized design which was named after the 1925 International Exhibition of Modern Decorative and Industrial Arts, held in Paris, France. Much Art Deco design was a transition from the earlier Art Nouveau and, as with the Art Nouveau epoch, was inspired by the art of the indigenous peoples of the Americas and by ancient Egyptian, Greek and Roman architecture. Art Deco jewelry motifs are characterized by geometric designs, diverse combinations of color, and abstract patterns. In 1922, the opening of Tutankhamen's tomb in Egypt inspired another Egyptian revival. Influences from cubism as well as African, oriental, Persian, Islamic, and Jugendstil designs were common in Art Deco jewelry. The early 1920s' interest in Cubism and Dadaism as a new art form greatly influenced the Art Deco period. Additionally, the mysteries of the pyramids and a continuing revival of astrological studies lent themselves to Art Deco designs, which in turn were incorporated in the Art Moderne period following 1930.
Art Deco style in other European countries was largely derivative, like the Italian G. Ravasco's diamond-studded geometric creations or Theodor Fahmer's later jewels. Some London jeweler, like Asprey and Mappin & Webb, produced Art Deco-style confections, but these are largely unsigned, so the designers are unknown. Some British design jewelers, however—like Sibyl Dunlop, Harold Stabler and H. G. Murphy, known primarily for their Arts and Crafts pieces—produced decidedly modern jewelry.
George Jensen's firm in Copenhagen continued to produce silver jewelry in the Art Deco era, adding sharp geometric forms to its repertoire of stylized motifs; these in turn were imitated by a host of European jewelers.[1]
Art-deco jewelry is one of the most sought-after jewelry categories, as demonstrated by auction results.[2] [3]

This style comes in the form of nature-inspired and more abstract geometric jewelry design inspired by the sciences, especially ecology, structural biology, and mathematics. Art Organique is characterized by continuity, flow, and movement as expressed in distinctly three-dimensional forms. According to the philosophy of the style, art should reflect man and nature. The goal is to understand nature’s underlying ‘spirit’ rather than merely copying natural form
at May 10, 2017 No comments:

Jewellery or jewelry consists of small decorative items worn for personal adornment, such as brooches, rings, necklaces, earrings, and bracelets. Jewellery may be attached to the body or the clothes, and the term is restricted to durable ornaments, excluding flowers for example. For many centuries metal, often combined with gemstones, has been the normal material for jewellery, but other materials such as shells and other plant materials may be used. It is one of the oldest type of archaeological artefact – with 100,000-year-old beads made from Nassarius shells thought to be the oldest known jewellery.[2] The basic forms of jewellery vary between cultures but are often extremely long-lived; in European cultures the most common forms of jewellery listed above have persisted since ancient times, while other forms such as adornments for the nose or ankle, important in other cultures, are much less common. Historically, the most widespread influence on jewellery in terms of design and style have come from Asia.

Pink diamond  is a type of  diamond  which has all the same elements as more commonly known diamonds except that they also exhibit pink colo...